Increasing instance of chronic diseases coupled with rising awareness of consumers to drive market growth at CAGR of 7.2% during 2020–2027

According to our latest market study on “Functional Proteins Market Forecast to 2027 – COVID-19 Impact and Global Analysis – Type (Hydrolysates, Concentrates, and Isolates), Source (Plant and Animal), Form (Dry and Liquid), and Application (Functional Foods, Functional Beverages, Dietary Supplements, Animal Nutrition, and Others),” The market was valued at US$ 10,297.91 million in 2019 and is projected to reach US$ 17,767.48 million by 2027; it is expected to grow at a CAGR of 7.2% from 2020 to 2027. The report highlights key factors driving the market growth and prominent players along with their developments in the market.

Consumers are more inclined toward wellness, health, and nutrition content. Food industry is continuously introducing new products considering the adoption of healthy lifestyle among consumers. Among functional food ingredients, protein is one of the significant ingredients that are naturally found in the range of animal and plant sources. Proteins are crucial for the smooth body functioning, and are required for the structure, function, and regulation of the body’s tissues and organs. The awareness among consumers regarding the benefits offered by functional proteins is contributing significantly to the growth of the functional proteins market. In addition, increasing disposable income of consumers in emerging economies in Asia Pacific, Middle East, and Africa, and South America contributes to the market growth.

Functional proteins are a complex mixture of biologically active proteins that supports and maintains normal immune function. Nowadays, the populace worldwide is inclined toward a healthy lifestyle and is spending considerably on nutritional products. Functional proteins help in lowering the blood pressure that is a major cause of heart attracts, strokes, and chronic kidney diseases. According to the estimates of Centers for Disease Control and Prevention, nearly half of adults in the US are affected by hypertension and are taking medication for hypertension. Furthermore, the rate of patients suffering from obesity is escalating across the globe. Obesity leads to various health issues such as heart disease, type 2 diabetes, stroke, and certain types of cancer. For instance, according to the Centers for Disease Control and Prevention, the prevalence of obesity in the US was 42.4% in 2017–2018. To overcome such issues, the populace is exploring new methods to stay fit and opt for healthy lifestyles. Such instances are estimated to increase the demand for foods enriched with functional proteins, aiding in the market expansion.

The COVID-19 outbreak was first reported in Wuhan (China) during December 2019. As of February 2021, the US, India, Brazil, Russia, the UK, France, Spain, Italy, Turkey, Germany, Colombia, and Argentina are among the worst affected countries in terms of confirmed cases and reported deaths. According to the latest WHO figures, there are ~108,579,352 confirmed cases and 2,396,408 total deaths globally. The outbreak has adversely affected economies and industries in various countries due to lockdowns, travel bans, and business shutdowns. The global food and beverage industry is one of the major industries suffering serious disruptions such as supply chain breaks, technology events cancellations, office shutdowns, etc. The lockdown of various plants and factories in leading regions such as North America, Europe, Asia Pacific, South America, and the Middle East, and Africa restricts the global supply chains and hinders the manufacturing activities, delivery schedules, and various goods sales. Transportation is also a major concern as many borders are closed due to the global travel bans imposed by countries in Europe, Asia, and North America. This also disrupts business collaborations and partnerships opportunities. All these factors have restrained the growth of the functional protein market. 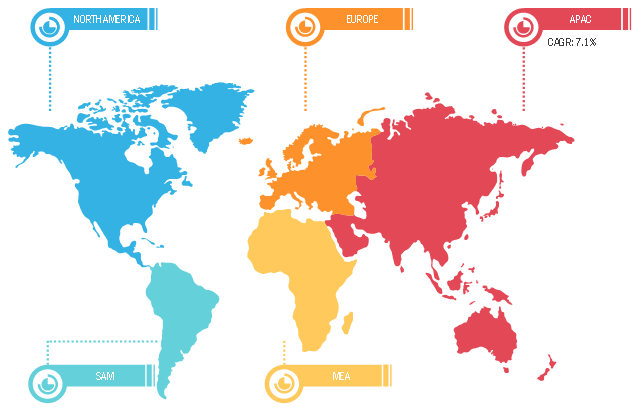 The Report Segments the Global Functional Proteins Market as Follows: