Published Date: 28 May 2021
Get Free Sample PDF Inquire Before Buying

Since the beginning of the 21st century, the aviation industry has flourished in China. At present, China holds the second-largest aviation market after the US. Boeing, an American aircraft giant, in November 2020 announced that Chinese carriers are projected to acquire 8,600 new airplanes over the next 20 years. Also, the country’s commercial jet fleet has expanded sevenfold since 2000, which is ~25% of all aviation growth worldwide over the past decade. According to Carnoc, about 25% of the global single-aisle aircraft were procured by Chinese carriers. The incremental growth of the aviation industry in China is attributed to rapid growth in middle-class consumers coupled with robust economic growth and growing urbanization. Further, the Aircraft giants such as Boeing and Airbus have manufacturing assemblies in China, which complements the growth of the aircraft turbine fuel system market. Also, in setback of Boeing 737, two consecutive crash and the announcement of discontinuation of Airbus A320 is projected to complement the adoption of COMAC C919 and C929 aircraft as these are considered the immediate substitute to Boeing 737 and Airbus A320. Meanwhile, the country has the second-largest defense budget across the world after the US, and a significant portion of the defense is allotted to the procurement of advanced military aircraft and upgradation & MRO operations. Thus, all these factors are bolstering the aviation industry in China, which is projected to create ample growth opportunities for the players operating in the aircraft turbine fuel system market.

The COVID-19 outbreak is adversely affecting the world and is continuing to shatter several countries. Until the outbreak, the aerospace industry was experiencing substantial growth in terms of production, despite huge backlogs from the aircraft manufacturers. Also, the global aviation industry witnessed a significant rise in the number of passengers count and increase in aircraft procurement. Unfortunately, the COVID-19 outbreak have decimated the demand for aircraft globally. The decline in production volumes hampered the businesses of various component manufacturers and associated technologies. Thus, the businesses of the aircraft turbine fuel system market players have been severely affected by destabilization in aircraft production. During the outbreak, the entire commercial aviation industry came to a halt with minimal resources to foresee the future. Several production units in the US, France, Russia, and China were temporarily paused to adhere to the government rules regarding the lockdown and physical distancing. The aircraft manufacturers witnessed 30%–50% reduction in demand for most of the aircraft models, especially, commercial aircraft models. The lower aircraft production and assembly declined the demand for aircraft turbine fuel system, resulting in lower revenue generation. This factor restrained the growth of the aircraft turbine fuel system market. Moreover, the strategy to retire various wide body jets and narrow body jets by different airlines across the globe with an objective to cut down operational costs is hindering the aviation aftermarket industry. Also, this is expected to l the demand for turbine fuel system in the coming years. Hence, the negative impact on aviation aftermarket also affected the businesses of numerous aircraft turbine fuel system market players. 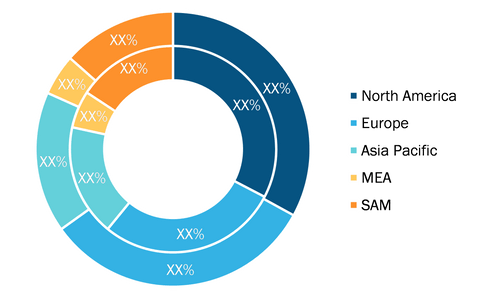