Digitally Printed Wallpaper Market is expected to reach US$ 17,676.0 million by 2027

According to our latest market study on “Digitally Printed Wallpaper Market Forecast to 2027 – COVID-19 Impact and Global Analysis– Substrate (Nonwoven, Vinyl, Paper, and Others), Printing Technology (Inkjet and Electrophotography), and End-User (Residential and Commercial),” the market was valued at US$ 3,253.3million in 2019 and is projected to reach US$ 17,676.0 million by 2027; it is expected to grow at a CAGR of 24.2% from 2020 to 2027.

In 2019, APAC led the global digitally printed wallpaper market with a significant market share, followed by Europe and North America. APAC is well-known for technological innovations that are taking place in countries such as China, India, Japan, South Korea, and Australia. APAC is projected to register the highest growth rate in the market during the forecast period. China contributes a major share in the Asia Pacific market. The increasing demand for inexpensive interior decoration, rising number of new housing units, increasing population, and surging investments in the infrastructure sector generate demand for digitally printed wallpaper in this region. The low manufacturing cost, and favorable policies and plans—such as the National New-type Urbanization Plan in China—propel the market growth in the region. The large population in countries such as India and China raises the demand for commercial and residential infrastructure. APAC comprises a large number of emerging economies such as India, China, and other southeastern countries, which are demanding more infrastructure projects. Moreover, various countries in the region are focusing on attracting new investments in infrastructure development. For instance, India's government has allowed 100% FDI under automatic route in completed projects for operations and management of townships, malls/shopping complexes, and business constructions. These factors are expected to support the growth of the construction industry in the region in the coming years, which would fuel the growth of the region's digitally printed wallpaper market.

The players operating in the digitally printed wallpaper market are focusing on both organic and inorganic growth strategies to sustain the competitive environment. For instance, in January 2020, A.S. CRÉATION TAPETEN AG announced its new wallpaper collection named “new life,” which offers striking designs, clear colors, and a mixture of graphic and floral patterns.

In 2019, Europe stood second in the digitally printed wallpaper market with a decent market share; it is anticipated to register steady CAGR from 2020 to 2027.Germany, France, Russia, the UK, and Italy are among the major countries in Europe. The construction industry is a crucial part of the European Union's (EU) economy as it contributes ~9% of the EU's GDP (as per the European Commission). Countries in Western Europe are technologically advanced and urbanized; on the other hand, Eastern European countries are gradually urbanizing their cities. The growing demand for commercial infrastructures such as offices, malls, hotels and resorts, and airports in the region supports the growth of the construction industry. The demand for printed wallpapers directly depends on the size of the construction industry; therefore, the growing construction industry across the region supports the growth of the digitally printed wallpaper market in Europe.

According to the latest report from World Health Organization (WHO), the US, Spain, Italy, France, Germany, the UK, Russia, Turkey, Brazil, Iran, India, and China are a few of the worst affected countries due to COVID-19 outbreak. The outbreak was first reported in Wuhan, China, in December 2019. The crisis is adversely affecting various industries across the world. The global economy is taking the worst hit, and it is likely to continue in 2021 also. The sharp decline in international trade is hindering the growth of the global economy. The production shutdowns, supply chain restrictions, procurement management, labor scarcity, and border lockdowns to combat and contain the outbreak are restraining the construction sector. Production slowdown in the construction industry is directly restricting the adoption of various ad-hoc products and solutions such as digitally printed wallpaper. Moreover, the construction companies and end-users are reducing their spending on adopting several technology-based products to deal with the current scenario, which is hindering the growth of the digitally printed wallpapers market. 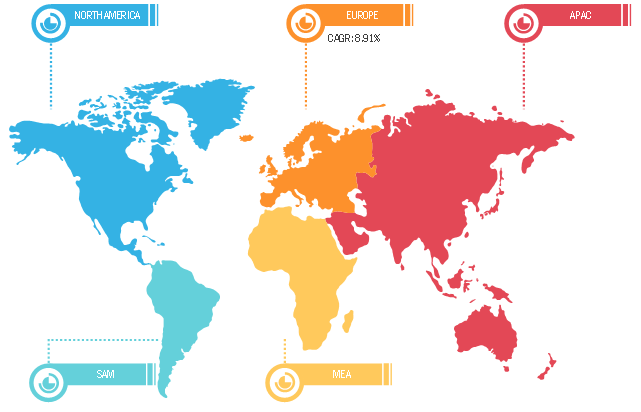