Europe Acetonitrile Market is expected to reach US$ 55.41Mn in 2027

Importance of acetonitrile in industrial and pharmaceutical applications to drive Europe Acetonitrilemarket at 4.8%CAGR during 2019–2027

According to the latest study on “EuropeAcetonitrile Market Forecast to 2027 – COVID-19 Impact and Analysis – by Type (Derivative and Solvent); by Application (Pharmaceutical, Analytical Industry, Agrochemical, Extractionand Others) and Country,”the Europe acetonitrile market was valued atUS$ 36.31Mn in 2018 and is projected to reachUS$ 55.41Mn by 2027: it is expected to grow at a CAGR of 4.8% during the forecasted period 2018-2027. The report highlights key factors driving the market growth and prominent players, along with their developmentsin the market.

Acetonitrile (CH3CN) is a synthetic compound that is used in the production of pharmaceuticals, scents, elastic items, pesticides, acrylic nail removers, and batteries. This dry fluid is the simplest form of natural nitrile (hydrogen cyanide is an easier nitrile, yet the cyanide anion is not classified as natural) that is obtained as a byproduct of acrylonitrile production process.. It is utilized as a polar aprotic solvent in natural amalgamation and in the refinement of butadiene. It is likewise used to remove unsaturated fats from animal and vegetable oils. Based on type, the acetonitrile market is categorized into derivative and solvent. In 2018, the solvent segment dominated the European acetonitrile market with a 63.9% share. Acetonitrile is used as a solvent in various applications such as pharmaceutical manufacturing, biotechnological applications, specialty chemicals, electronics, and HPLC applications. Strong demand from these end-use Industries is likely to drive the growth of the segmental market. However, the derivative segment is expected register a higher CAGR during the forecast period. Based on application, the acetonitrile market is categorized into pharmaceutical, analytical, agrochemical, extraction, and others. The pharmaceutical segment is accounted for a major share of Europe acetonitrile market.

Acetonitrile is a core solvent in the chemicalsand pharmaceuticals industries, and these industries account for ~70% of the global demand for the solvent. The high demand of acetonitrile is attributed to its impeccable solvation ability for a wide range of polar and non-polar solutes, and physical properties such as low freezing/boiling points, low viscosity, and relatively low toxicity. Currently, the pharmaceuticals industry has two primary uses of acetonitrile—first, acetonitrile is used in laboratories, particularly as a mobile phase in liquid chromatography analytical techniques; and second,it is used as solvent in industrial processes, such as manufacturing of antibiotics.Due to the need for high purity solvents in analytical techniques such as high performance liquid chromatography (HPLC), laboratories tend to use “Analar” grade acetonitrile;on on the other hand, industrial applications favor “technical grade” acetonitrile due to its lower cost. In both cases, the solvent is highly refined in terms of purity, typically >99.9% for Analar and >99.5% for technical grade.

Acetonitrile is widely used in battery applications as it has relatively high dielectric constant and electrolytes can dissolve easily in it. The growth in the chemical and processing industries in Europeis expected to boost the acetonitrile market growth. The growth in the chemical and processing industries in this region is expected to boost the acetonitrile market growth. Acetonitrile is primarily used as a solvent in the manufacturing pharmaceuticals and spinning fibers; it is also used for the casting and molding of plastics, and the extraction of fatty acids from animal and vegetable oils. The solvent is also used in lithium batteries; in chemical laboratories, it is used for the detection of materials such as pesticide residues. Acetonitrile is also used in the dyeing of textiles and the production of perfume as a chemical intermediate;it is used in coating compositions as a stabilizer for the chlorinated solvents. Increasing demand for acetonitrile from various industries is a major factor boosting the growth of the market for the same in Europe. However, concentrations up to 500 parts per million acetonitrile through inhalation cause the irritation of mucous membranes in humans, while the higher concentrations can lead to weakness, nausea, and convulsions. These ill-effects hamper the market growth in Europe.

Recently, the World Health Organization (WHO) has announced the outbreak of COVID-19, the novel form of a disease caused by the virus SARS-CoV-2, as a pandemic. This outbreak started in December 2019 in Wuhan, China, and later, it turned into a pandemic, causing numerous deaths worldwide. Acetonitrileis mainly used as a disinfectant in the medical industries, hotels and restaurants, schools, and colleges for disinfecting the surfaces. The outbreak of COVID-19 pandemic has severely impacted the chemicals& materials industry. The shutdowns of this industry and supply chain disruptions due to lockdown of countries has created a strain on the supplies of the products of this industry.In Europe, IRussia is the hardest-hit country by this outbreak. It is expected to suffer an economic hit due to the discontinuation of revenue from various industries. Other European Union (EU) member states have implemented drastic measures and travel restrictions, including partially closing their borders. This is anticipated to impact growth of various marketsin Europe. 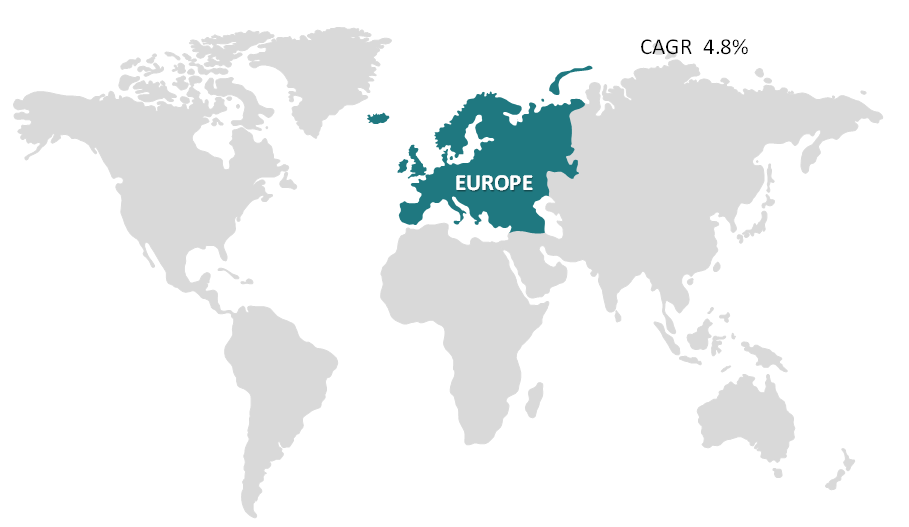 The report includes the segmentation of the Europe acetonitrile market as follows: