According to our new market research study on “Europe Biopsy Devices Marketto 2027 – Regional Analysis and Forecast – by Product, Application,and Technology,”the market is expected to reach US$ 1,090.67 Mn by 2027 from US$ 700.01 Mn in 2019; it is estimated to grow at a CAGR of 5.8% from 2020 to 2027. The report provides trends prevailing in the Europe biopsy devices market,and the drivers and hindrances pertaining to the market growth.

The Europe biopsy devices market based on product is segmented into needle-based biopsy, procedure trays, localization wires, and others. In 2019, the needle-based biopsy segment accounted for the largest share of the market. The growth of the market for this segment is mainly attributed to the increasing adoption of needle based-biopsy due to high accuracy of this procedure, associated with minimal injury. Furthermore, the segment is also likely to register the highest CAGR in the market during 2020–2027.

The growth of the Europe biopsy devices market is mainly attributed to rising awareness regarding cancer among patients and improvements in biopsy procedures; increasing incidences of breast, prostate, and lungcancer, among others; rapid advancements on the technology front; and initiatives to spread awareness about cancer. However,limitations associated with biopsy devices is the major factor hindering the market growth in Europe.

A few of the leading companies operating in the Europe biopsy devices market are B. Braun Melsungen AG,Medtronic, Cardinal Health Inc., and Danaherand Hologic, Inc. 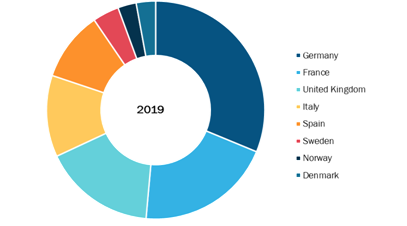