Hydrogen Peroxide for Disinfection/Sterilization Market is expected to reach US$ 1,557.39 Mn in 2027

Report : Hydrogen Peroxide for Disinfection/Sterilization Market Forecast to 2027 - COVID-19 Impact and Global Analysis by End Use Industry (Horticulture, Food and Beverages, Healthcare, Others)

According to our latest market study on “Global Hydrogen Peroxide for Disinfection/ Sterilization Market to 2027 – COVID-19 Impact and Analysis- by End Use Industry (Horticulture, Food and Beverage, Healthcare, Others), and Geography,” the market is accounted for US$ 981.6 million in 2019 and is expected to grow at CAGR of 5.2% during the forecast period 2020 – 2027, to account for US$ 1,557.4 million by 2027. The report highlights key factors driving the market growth and the prominent players along with their developments in the market.

Hydrogen peroxide is the compound formed as a result of the chemical reaction of oxygen and water. In its pure form, it is pale blue liquid that is slightly more viscous than water. Hydrogen peroxide is generally unstable, and it decomposes slowly in the presence of light. Being unstable, it is typically stored with a stabilizer in a weakly acidic solution. Aqueous hydrogen peroxide solution differs from other pure substances owing to the effects of hydrogen bonding between water and hydrogen peroxide molecules. The peroxide is often used for cleaning skin wounds to prevent infection from minor cuts and scrapes. It works as a disinfectant by destroying the essential components of germ cells, and it is effective against a wide range of viruses, fungi, spores, and bacteria, among others.

Consumers as well as the manufacturers of healthcare products have realized the importance of hydrogen peroxide as a disinfectant. Hydrogen peroxide contains a peroxide ion, i.e., one extra oxygen atom than a stable water molecule. The compound is used in the form of a disinfectant to treat inflammation of gums. In the form of a mild antiseptic, hydrogen peroxide is used on the skin to prevent minor cuts, scrapes, and burns. It is used as a mouth rinse to remove mucous or relieve minor mouth irritation. The release of oxygen from the compound causes foaming that removes dead skin and cleans the area. In hospitals, the contaminated surfaces lead the transmission of healthcare-associated pathogens, causing nosocomial infections. Hydrogen peroxide-based cleaners are used to decontaminate soft surfaces when applied as spray. These disinfectants have better surface compatibility, lower kill time, and low residue. Hydrogen peroxide disinfectants are mostly offered without fragrance or harsh odors to support the better patient experience. Also, pre-moisturized, durable, and ready-to-use hydrogen peroxide wipes are available in the market. Hydrogen peroxide is often considered as a household chemical as it is used in several residential applications, such as bathroom cleaning and toothbrush cleaning.

The Europe hydrogen peroxide for disinfection/sterilization market is expected to grow at the highest CAGR during the forecast period. There has been high demand for this compound in the region due to its applications in horticulture, food & beverages, healthcare, and other end-user industries. Apart from this, continuous research and development has led to the widespread adoption of hydrogen peroxide. The regional market has been experiencing high growth in the production of hydrogen peroxide with the expansion of the manufacturing units of a few major players such as Solvay S.A. in the region.

The COVID-19 outbreak has affected economies and industries in various countries due to government-imposed, as well as self-imposed, lockdowns, travel bans, and business shutdowns. Chemicals and materials is one of the major industries suffering serious disruptions such as supply chain breaks, technology events cancellations, and office shutdowns as a result of this outbreak. China is the hub of manufacturing and the largest raw material supplier for various industries worldwide, and disturbed operations in the country are affecting several businesses from all other countries dependent on its manufacturing sector. The global market breakdown due to COVID-19 spread is also affecting the growth of the market for hydrogen peroxide used in disinfection/sterilization applications. 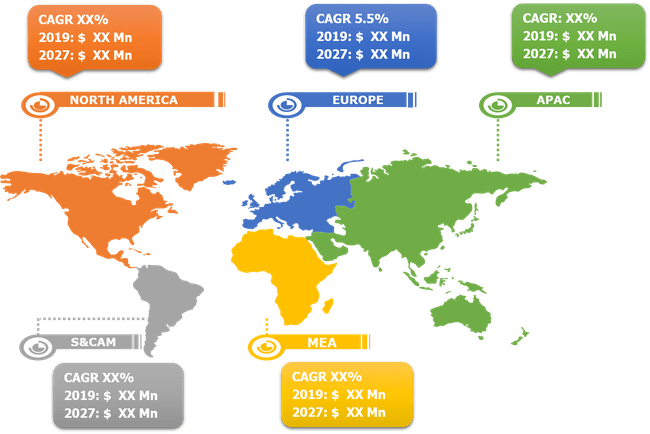 The report segments the global hydrogen peroxide for disinfection/sterilization market as follows:

Hydrogen Peroxide for Disinfection/Sterilization Market, by End Use Industry