According to our latest market study on “Lithium-Ion Battery Recycling Market Forecast to 2027 – COVID-19 Impact and Global Analysis – by Technology (Lithium-Nickel Manganese Cobalt, Lithium-Iron Phosphate, Lithium-Manganese Oxide, Lithium-Titanate Oxide, and Lithium-Nickel Cobalt Aluminum Oxide) and Application (Automotive, Mining, Consumer Electronics, Industrial, and Power),” the market was valued at US$ 403.8 million in 2019 and it is projected to reach US$ 1,392.8 million by 2027; it is expected to grow at a CAGR of 19.6% from 2020 to 2027.

North America is flourished with the footprints of lithium-ion battery recycling providers, which cater to a wide range of industries, from automotive to mining to consumer electronics to marine. The US in known for making continuous technological developments. Hence, it is adopting advanced technologies at an impressive rate. The scope of next-gen electric vehicles is booming in the US, which is anticipated to contribute toward the adoption of lithium-ion batteries.

Europe is another crucial market for the growth of lithium-ion battery recycling market over the forecast period. As the region houses major automotive manufacturers, the scope of developing electric vehicles is high in the region. Germany, France, and the UK are prominent countries having presence of key automotive manufacturers. This aspect is anticipated to contribute toward the production cycle of electric vehicles, thereby boosting the use of lithium-ion batteries.

The MEA and SAM are other regions where energy and mining sector is growing at an exponential rate. This, in turn, is expected to boost the market growth.

The US is the worst hit country in North America. The continuous increase in infected individuals has led the government to impose lockdown across the nation’s borders. The majority of the manufacturing plants are shut down, municipalities are functioning slowly as compared to the past, and industries are at a halt. All of these reasons are negatively affecting the market. The automakers in the country have agreed to evaluate and implement the rotating partial shutdown of factories, extensive deep cleaning of surroundings, and stretched periods between shifts, as well as comprehensive plans to avoid member contact. In March, several automakers closed their facilities for extensive cleaning. These include GM, Ford, and Honda Motors. 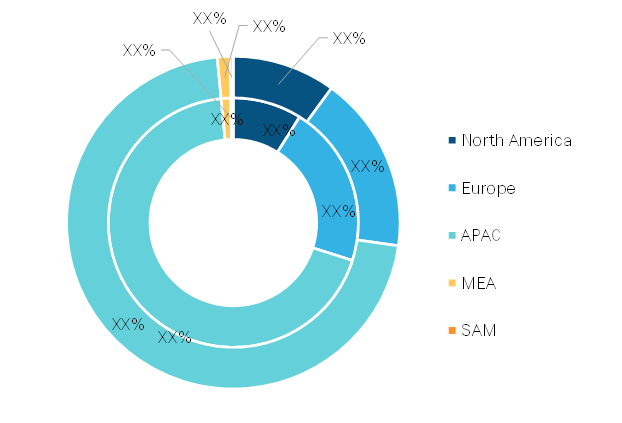 The global lithium-Ion battery recycling market has been segmented as follows: