Published Date: 26 May 2020
Get Sample PDF Inquire Before Buying

According to our latest study on “Terahertz Technology Market to 2027-- COVID-19 Impact and Global Analysis by Component (Terahertz Sources, and Terahertz Detectors); Type (Terahertz Imaging Systems, Terahertz Spectroscopy Systems, and Terahertz Communication Systems); and Application (Medical and Healthcare, Defense and Security, Food and Agriculture, Industrial and Other); and Geography,” the market was valued at US$ 158.94 million in 2019 and is projected to reach US$ 1,418.84 million by 2027; it is expected to grow at a CAGR of 27.8% from 2020 to 2027.

The terahertz range falls between the microwave and infrared ranges of the electromagnetic spectrum, which comprises the frequency of one million oscillations per second. Its exceptional properties make the terahertz radiation a crucial technology to be adopted in the future. This technology is usually used to detect hidden explosives and drugs as well as to recognize substances flowing from the plastic pipe. The terahertz technology is proficient enough to nondestructively measure the layer thickness and monitor the flaws in materials made of ceramics or plastics. Owing to its low energy characteristics, the terahertz radiations are nonhazardous to animals as well as humans. The technology is usually integrated with scanners based on active and passive methods. In a passive method, the scanning is constrained to the natural terahertz radiations emitted through the human body. Similarly, the active method integrates an additional artificial radiation source through terahertz radiation. Thus, the systems use the discrepancies in the wavelength from the backscatter to recreate an image.

Currently, the terahertz technology market is principally dominated by developed regions such as North America and Europe region, accounting for ~70% of the global market collectively. Western Europe is one of the wealthiest regions on the continent of Europe, with greater GDP per capita. Europe was at the forefront of the industrial revolution and was home to premium manufacturing. Itis expected to dominate the global terahertz technology market from 2020 to 2027. According to the European Space Agency (ESA), Technology Transfer Programme, the technology is used for non-space applications by a significant number of European companies. Overall, the ESA itself has >120 technologies available for commercial use in European businesses. At the airports in this region, different sensor systems are used to speed up security screening. The screening criteria for workers range from “absolute physical,” which is commonly used in Europe, to “complete and continuous,” which is common in the US. While US airport employees are subject to regular background checks, at the moment, it is the responsibility of the airport operator or airline how employees, contractors, and suppliers are screened. Increasing numbers of companies offering terahertz technology are also driving business growth in Europe. TeraView, for example, produces instruments that provide a reliable and robust terahertz light source and exploit its properties to characterize a wide range of materials. In June 2014, the company expanded its presence in Asia by opening a new office in Seoul (South Korea) to improve operations, technical support, and application-specific expertise for its customers and business partners in the region. Further, Asia Pacific is followed by the Middle East and Africa, and South American market.

North America attracts several technological developments across economically robust countries. The companies in the region are continuously enhancing the overall business processes to meet customers' demand for high-quality products and services in the best possible way. North America is expected to be a strong player in the global economy, as the largest market for technology-based solutions, particularly in the development and implementation of new technologies. The demand for this technology is the largest in the region, due to terahertz being a new technology and North America being one of the early adopters of modern technologies. Increasing helicopter and commercial aircraft production in the US is also expected to drive the terahertz technology market in that region. The huge aerospace industry in the country exports >60% of its total offerings. The presence of various research institutes in the region, such as the Jet Propulsion Laboratory, is also expected to contribute to market growth through binging up developments in applications and implementation of the terahertz technology.

The emergence and rapid spread of COVID-19 has paralyzed numerous countries in the world. The continuous surge in count of infected patients is threatening several industries globally. As per latest WHO figures, for May 13, 2020, there are ~4.17 million confirmed COVID-19 cases globally with ~287,000 total deaths occurred so far, and the number is growing at varying rates in different countries. The global economy is anticipated to take a worst hit in the year 2020, with the possibility of extended effects in 2021. Since majority of the countries are exercising lockdowns, the demand for terahertz technology is decreasing at a prominent rate. This is due to the fact that, the key terahertz technology product purchasing countries have been restricting their investment on these solutions as they are utilizing a fair percentage of their budget to combat COVID-19. The temporary shutdown of manufacturing facilities is also showcasing negative trend in the terahertz technology market. 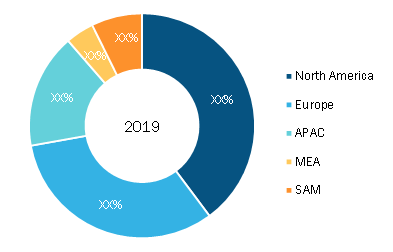 The report segments the global terahertz technology market as follows: