According to our latest market study on “Global Seafood Market Forecast to 2027 – COVID-19 Impact and Analysis by Type (Fish, Crustaceans, Mollusca, and Others), Product Type (Fresh, Frozen, Canned, and Others), and Distribution Channel (Supermarkets and Hypermarkets, Convenience Store, Specialty Store, Online, and Others),” the global seafood market was valued at US$ 158,910.17 million in 2019 and is projected to reach US$ 198,854.86 million by 2027; it is expected to grow at a CAGR of 2.9% from 2020 to 2027. The report highlights key factors driving the market growth and prominent players along with their developments in the market.

As per the Food and Drug Administration (FDA), seafood encompasses all commercially obtained saltwater and freshwater fish, molluscan shellfish, and crustaceans. The demand for seafood across the globe is anticipated to increase dramatically owing to its health benefits. According to the Food and Agriculture Organization, by 2030, an excess value of 40 million additional tons of seafood, which is an increment of almost 30%, would be required to meet the rising demand. Rising per capita consumption accompanied by the affluent nations’ demand for imported seafood products is considered to strengthen the market further. The demand for seafood products across specialty restaurants is growing at a robust pace in recent times. A large population of consumers prefers to eat seafood over other cuisines, and this is a major factor that propels the market expansion. Moreover, coastal regions are implementing concerted efforts to develop advanced supply chains for the export and supply of seafood. Also, the growth of the seafood market highly depends on the ease of procuring seafood from coastal regions. Furthermore, the improvement in economic condition and progression in disposable income levels helped the market growth. Developing economies are witnessing strong urbanization trend and it resulted in an increase in disposable income among the middle-income groups, subsequently adding to the middle-class population. The medium as well as high-income consumers in urban areas are changing their consumption trend from essential to premium food products. This trend favors seafood companies and suppliers to improve their product and service line in the seafood segment.

Seafood provides numerous health benefits to consumers. This is the primary factor that drives seafood consumption among consumers. Health consciousness among consumers is increasing tremendously, which further helps in market expansion. Seafood is a high-protein food, which is low in calories, total fat, and saturated fat. Seafood is rich in vitamins and minerals and offers a wide array of health advantages to the consumer. For instance, recent studies have shown that seafood consumption can reduce the risk of heart attack, obesity, stroke, and hypertension. Seafood also provides vital nutrients for developing infants and children. Further, seafood is commonly considered a low-calorie protein source. Low-fat species of fishes, such as flounder, cod, and sole, contain less than 100 calories per 3-ounce cooked portion. Fattier fishes, such as salmon, mackerel, and herring have about 200 calories per serving. Moreover, fish is packed with omega-3 fatty acids and vitamins, such as B2 (riboflavin) and D. These indispensable components keep the heart and brain healthy, attracting consumer traction. Two omega-3 fatty acids present in fish are docosahexaenoic acid (DHA) and eicosapentaenoic acid (EPA). Scientific studies show that the marine-derived omega-3 fatty acids reduce the risk of heart disease and contribute to vision and brain development in infants. The American Heart Association advises 1000 milligrams of EPA/DHA per day for patients with coronary heart disease and two oily fish meals per week for patients without heart disease. The human body does not produce omega-3 fatty acids in needed amounts, so they must be consumed through the diet. Salmon, sardines, trout, herring, canned mackerel, canned light tuna, and oysters contain a high amount of omega-3 fatty acids. Omega-3 fatty acids help to maintain a healthy heart by reducing blood pressure and reducing the risk of sudden death, abnormal heart rhythms, heart attack, and strokes. Also, fish contains an ample amount of phosphorus and calcium as well as minerals, such as zinc, iodine, iron, magnesium, and potassium.

Covid-19 first began in Wuhan, China, during December 2019, and since then it has spread across the globe. As of November 2020, the US, India, Brazil, Russia, France, Spain, Argentina, Colombia, the UK, Mexico, Peru, and South Africa are some of the worst affected countries in terms of confirmed cases and reported deaths. According to the latest WHO figures, there are ~46,591,622 confirmed cases and 1,201,200 total deaths globally. The coronavirus outbreak has affected economies and industries in various countries due to lockdowns, travel bans, and business shutdowns. The global food & beverages industry is one of the major industries that are suffering serious disruptions, such as supply chain breaks, and office shutdowns, resulting from this outbreak. The lockdown of various plants and factories in leading regions, such as North America, Europe, Asia Pacific, South America, and the Middle East, and Africa, affects the global supply chains and negatively impacts the manufacturing, delivery schedules, and sales of various goods. Seafood importing countries and companies are struggling financially, as many businesses have been shut down or facing insecurity. Hence, in March and April, many importers canceled, postponed, or reduced their orders. Transportation is also a major concern as many borders are closed due to the global travel bans imposed by countries in Europe, Asia, and North America. This has also affected business collaborations and partnerships opportunities. All these factors have negatively affected the seafood market. 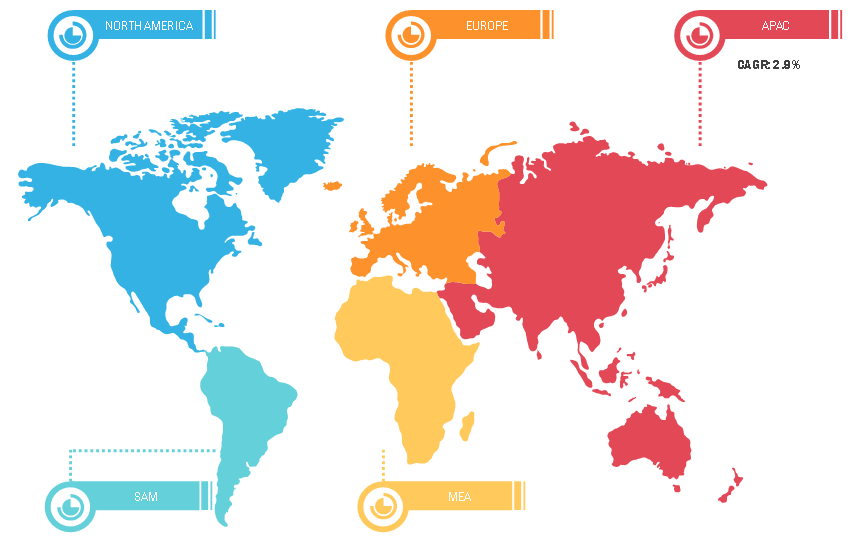 The report segments the global seafood market as follows: