The oxide of silicon with the chemical formula SiO2 is available abundantly in the natural form and mostly identified in the quartz form. Silicon dioxide is found naturally in plants, animals, rocks and about 59 percent of earth's crust is made up of silica. The addition of silicon dioxide in food avoids clumping and acts as an anticaking agent. Silicon dioxide is used in structural elements as an electrical insulator and also as an additive in the pharmaceutical industries. 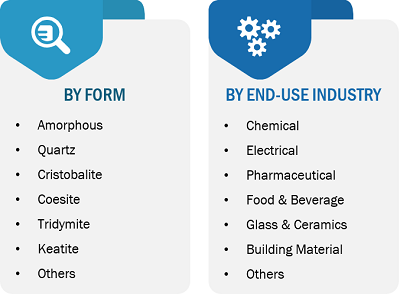 The report provides a detailed overview of the industry including both qualitative and quantitative information. It provides an overview and forecast of the global silicon dioxide market based on various segments. It also provides market size and forecast estimates from the year 2020 to 2028 with respect to five major regions, namely; North America, Europe, Asia-Pacific (APAC), Middle East and Africa (MEA) and South & Central America. The silicon dioxide market by each region is later sub-segmented by respective countries and segments. The report covers the analysis and forecast of 18 countries globally along with the current trend and opportunities prevailing in the region.

The report also includes the profiles of key silicon dioxide companies along with their SWOT analysis and market strategies. In addition, the report focuses on leading industry players with information such as company profiles, components and services offered, financial information of the last three years, key developments in the past five years.
The Insight Partner's dedicated research and analysis team consist of experienced professionals with advanced statistical expertise and offer various customization options in the existing study.