Factors such as increased interest in air travel among the middle-class populations, especially in emerging countries; and a rise in the working-age population worldwide boost total air passenger traffic in the world. The newest International Civil Aviation Organization (ICAO) analysis of global air traffic shows obvious indicators of a strong global recovery in air traffic, owing to  increased carrier confidence and a variety of regional air connectivity and air travel facilitation enhancements across the globe. From January 2022 to April 2022, the number of air passengers increased by 65% compared to the same period in 2021, while aircraft flight departures increased by 30%. Airline seat capacity increased by 32% during this period. Thud, with these conditions triggering the air travel demand, the International Civil Aviation Organization (ICAO) predicts a stronger overall rate of recovery in 2022 than 2021. Thus, such an increase in air passenger traffic is driving the expansion of the airborne SATCOM market

With the increase in air traffic and aircraft demand, air carriers are increasing their aircraft delivery volumes. The demand for new aircrafts is not just from existing airlines reestablishing their fleet; but also, from new low-cost aircraft entering the market. For instance, Boeing expects to deliver more than 49,000 airplanes by 2040. Airbus is expecting to attain more than 39,000 airplane deliveries from 2020 to 2040. In March 2022, Boeing delivered 41 jets, 3 767s, 1 777F, and 37 737s (35 MAX/2 NG). Further, in January 2022, the company received an order from Qatar Airways for 737 Max planes and new 777X freighters, and the order was worth US$ 34 billion. The passenger aircraft 777X is expected to be put in service in late 2023. Many countries plan to construct more airports in the future because of increasing air passenger traffic. For instance, per the 14th Five-Year Plan (2021–2025) of China, various industries across the country are establishing plans in accordance with the country's development which was started in 2021. In line with the same plan, the civil aviation industry aims to improve capacity; speed up airport building projects; and develop other transportation modes such as railways, highways, and waterways. According to the 14th Five-Year Plan, China will build more than 30 new civil airports and raise civil aviation capacity by 43% to achieve the mark of 2 billion passenger trips in the five year period. Thus, the addition of new airports and the increasing number of new aircraft will generate future opportunities for the airborne SATCOM market growth.

Lockdowns and supply chain disruptions caused by the COVID-19 pandemic hampered the airborne SATCOM market in the Middle East & Africa (MEA). Many countries in the region suspended manufacturing activities in 2020 due to irregularities in import and export activities. The MEA region experienced three waves of the pandemic that impaired this region's entire aerospace & defense industry ecosystem. In early 2020, the airports were shut down, bringing the airline industry to a standstill and limiting the airborne SATCOM market growth. 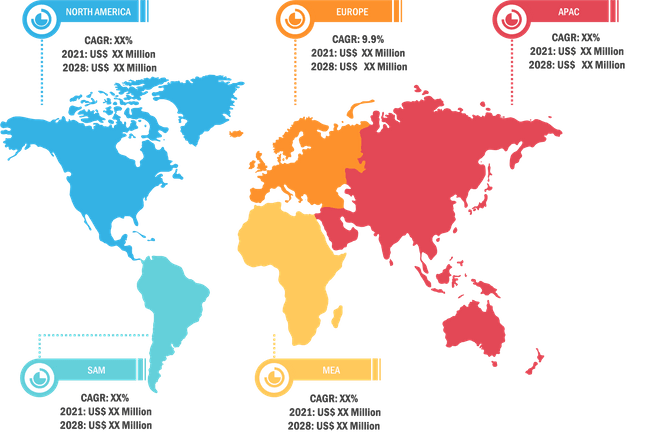 The growth of commercial aviation in APAC is attributed to rising middle-class income, robust economic growth, and favorable government policies. The growing demand for aircraft, particularly in developing countries such as China and India, drives the growth of the airborne SATCOM market. As of January 2022, InterGlobe Aviation’s IndiGo, India’s largest passenger-load airline, had the fleet of 290 aircraft, of which only 4 are parked and the rest are in service. The company holds the largest share of Airbus aircraft present in the Indian aviation market. In November 2021, Viasat, a satellite operator, announced that it will start providing the in-flight connectivity (IFC) service to domestic and international airlines using the Ka-band ChinaSat-16 satellite system, in collaboration with China Satellite Communications (China Satcom) in the coming months. Meanwhile, the demand for general aviation aircraft, especially business jets and helicopters, has increased in APAC over the years. In 2020, the Aviation Industry Corporation of China (AVIC) launched the AC332, a multipurpose, civilian-use helicopter. Such developments are expected to propel the growth of the aviation industry in the region, thereby generating a huge demand for airborne SATCOM systems.

Based on platform, the airborne SATCOM market share is segmented into commercial aircraft, military aircraft, helicopters, and UAVs. The commercial aircraft segment is expected to dominate the market during the forecast period. The increase in air passenger traffic and the need to replace aging aircraft are the factors contributing to the market growth for this segment.

Airborne SATCOM market players are mainly focused on the development of advanced and efficient products.