The constantly increasing use of drones in many applications is driving the demand for anti-drone technologies. The rising surge in terrorism is likely to add significant fuel to the worldwide market expansion. In addition, the rise in security breaches caused by unauthorized unmanned aerial vehicles (UAVs) is expected to propel the global counter UAV market growth forward. Furthermore, the rapid deployment of unmanned aerial vehicles due to a decline in their pricing is driving the global counter UAV market. Several public safety agencies and commercial organizations worldwide are increasingly implementing anti-drone technologies to suit the increased demand for security.

Several government bodies across the globe invested a substantial amount in the procurement of defense equipment despite experiencing economic turmoil. The global military spending increased by 2.6% in 2020 compared to 2019, according to SIPRI. The counter UAV market in 2020 and 2021 underwent high adoption from several global air, land, and naval forces. However, supply chain disruptions across the globe caused by the significant spread of the COVID-19 impacted the counter UAV system supplies in 2020. On the contrary, with the normalization of the supply chain across the globe, the counter UAV market growth started to revive from its impact post Q2 of 2020. 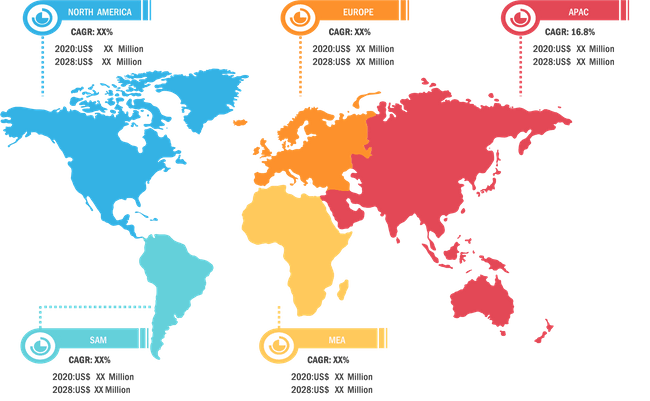 According to the US Department of Defense (DOD), the counter UAV systems help the US army to detect and neutralize hostile or attacking drones. Due to their size, construction material, and flight altitude, much smaller UASs are undetectable by typical air defense systems. As a result, the US Department of Defense (DOD) expects to spend at least US$ 636 million on counter-UAS (C-UAS) research and development in FY2022 and at least US$ 75 million on C-UAS procurement, a US$ 134 million increase over FY2021. The US DoD continues developing, purchasing, and deploying these technologies, contributing to the market's growth.

Based on end user, the counter UAV market share is segmented into defense and homeland security. The defense segment accounted for a higher share in 2020. The rise in defense spending by developed and developing nations is propelling the increased adoption of counter UAV systems by land, air, and ground forces. The increase in terrorism is also driving the demand for defense forces globally. The rise in defense spending over the years also leads to the market's growth. For instance, according to SIPRI, the global defense spending over the years 2018, 2019, and 2020 accounted for US$ 1.8 trillion, US$ 1.92 trillion, and US$ 1.98 trillion, respectively. These rise in military expenses across the globe has contributed to modernization of military equipment used across borders and during wars, which is further expected to positively influence the adoption rate of anti-drone systems by the global defense forces.

Players operating in the counter UAV market are mainly focused on the development of advanced and efficient products.

What are factors driving the growth of Counter UAV market growth?
The counter UAV systems are among the key components of soldier modernization among majority of the defense forces. Various military bodies across both developed and developing countries over the years have increased their spending in the procurement of counter UAV systems. The demand for counter UAV systems is expected to continuously increase over the years, as the threat of UAV based attacks continue to rise along with the rise in manufacturing of small and easily affordable drones. This factor is boosting the counter UAV market and is anticipated to continue to help the market to surge. Some of the recent developments in the counter UAV market include; In September 2021, The Indian Air Force (IAF) has signed an order with local private company Zen Technologies for an undetermined number of devices to counter unmanned aerial vehicles worth US$ 21.2 million (INR1.55 billion). Similarly, in July 2021, the IAF after an attack at its Jammu station procured 10 anti-drone systems for installations across its borders.
What are market opportunities for market?
The rising terrorist attacks and political instability among various developed and developing countries is increasing the defense and homeland security forces to increase their procurement of advanced solutions such as radar systems, communication systems and anti-drone technologies amongst others. For instance, department of defense of US, European Union and other authorities like Indian defense ministry has increased their spending on procurement of anti-drones over the years. This is leading the counter UAV manufacturers to adopt organic and inorganic growth strategies, such as high investments, product offerings, and global expansion, further creating growth opportunities for the global counter UAV market.
Which component is expected to dominate the market in the forecast period?
Based on technology, the global counter UAV market is bifurcated into laser systems, kinetic system, and electronic systems. The electromagnetic systems accounted for the highest share in 2020 owing to its easy deployment across both static and mobile conditions. However, the laser systems are expected to grow with the highest CAGR over the forecast period. This growth is owing to the high adoption of laser technology integrated weapons by the defense organizations across the globe
Which system is expected to dominate the market during the forecast period?
The rise in defense spending by both developed and developing nations is propelling the high adoption of counter UAV systems by all land, air, and ground forces. The rise in terrorism is also driving the demand for the same among the defense forces across the globe. The rise in defense spending over the years is also attributing to the growth of the market. Moreover, the homeland security in the global counter UAV includes police forces, and coast guards, and border security forces. Rising investment by state authorities to empower their security forces against unidentified UAVs is propelling the growth of the market.
Which region is expected to dominate the Counter UAV market in the forecast period?
North America holds the largest share in the global Counter UAV market. It is geographically bifurcated into the US, Canada, and Mexico. The US and Canada have significant power in terms of defense. The North American countries have been increasing their military and defense spending over the years in order to modernize its soldiers with advanced equipment for its future endeavors. The extensive focus on soldier modernization with advanced technologies is playing a crucial role in the development of the counter UAV market in the North American countries.
What trends are expected to drive the demand for various Counter UAV market?
As both military and civilian personnel face an increasing aerial danger, counter UAV equipment is experienced rise in adoption over the years. From handheld devices to a flying counter-drone system, counter-UAV technology is becoming more pervasive. There are several ways to destroy an UAS (unmanned aerial system), ranging from kinetic effectors to jamming and directed energy. Different systems, on the other hand, are required to fill distinct responsibilities, and a tiered approach is frequently required to maintain security. Drones are rapidly being employed by defense forces across the globe because they can swiftly obtain ready-to-use imagery and can reach regions that humans cannot. Drones, on the other hand, can pose a menace if not operated with caution. As a result, counter-drone technology has evolved.