With the rapidly growing aviation industry from the past few years, the demand for airline MRO services is also increasing. Emerging economies in APAC are highly focused on extending MRO services to commercial as well as military aircraft companies. Economic growth, increasing passengers, and growing aviation infrastructure spending across APAC are among the factors driving the growth of the aircraft MRO market. A few APAC countries such as Singapore, Malaysia, and Thailand produce a large amount of revenue from the aviation MRO market due to well-established MRO hubs. For instance, among the rest of APAC countries, Singapore dominates the market in the region due to its established hubs of MRO and significant presence of major industry players such as GE Aviation, Airbus, and Rolls-Royce. According to Wisconsin Economic Development Corporation (WEDC), Singapore comprises 120 aerospace companies, which almost holds one-quarter of the APAC’s MRO market players. Further, the rising number of middle-class travelers, especially in APAC countries such as India, China, and Singapore, is the main factor contributing to the growth of air travel, which is consequently increasing the need for aircraft MRO services in the region.

The COVID-19 pandemic has hampered the economic growth of almost every country. The airline industry has witnessed high impact of this economic downturn. Moreover, the damaged economic growth of countries has led to shutdown of small airlines companies in 2020. Due to the ongoing COVID-19 outbreak, all the major countries in Europe, Asia Pacific, and North America have imposed strict restrictions on business activities and movement of goods and people. All these factors are restricting both supply of and demand for aircraft maintenance services, thereby hindering the revenue growth of the global aircraft MRO market. Also, second wave of COVID-19 outbreak in countries such as India, France, and the US would negatively impact the market growth throughout the first half of 2021. It is expected that the aircraft MRO market growth will stabilize in 2022, and the market will witness positive growth from 2022 to 2028. 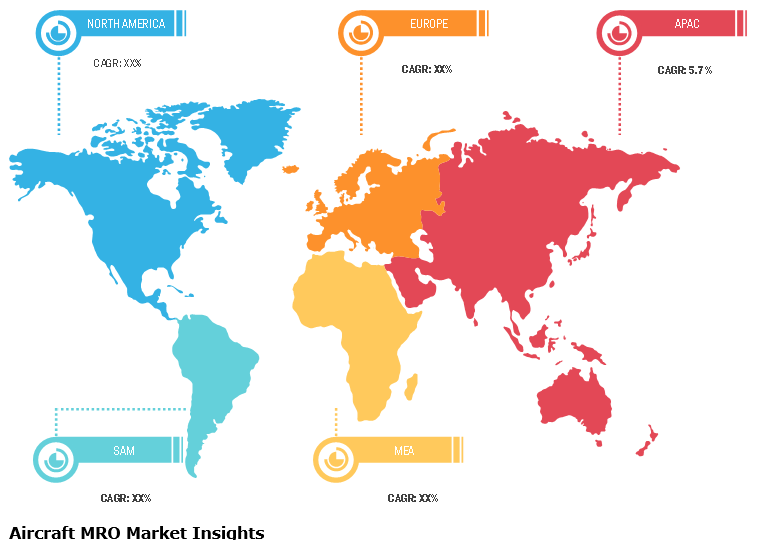 Major countries have put restrictions on international travelling amid ongoing COVID-19 outbreak. However, the aviation industry is growing and would continue to grow owing to the ever-expanding global middle-class passenger count. As per the IATA, the number of global airline passengers could double by 2037, which would increase the flying hours of the aircraft fleets. Hence, the demand for maintenance and repair of the aircraft components would increase in coming years. The growth in the aviation industry would be more concentrated in APAC, particularly in India and China. In the near future, the rest of APAC countries such as Singapore and Malaysia and others would be the biggest global market for aircraft MRO, and APAC would be the new center of the global aviation industry. China is also concentrating in building new airports. For instance, the Civil Aviation Administration of China (CAAC) aims to build 216 new airports by 2035 to meet the growing demands for air travel, which would have direct impact on the aircraft MRO market in a positive way during the forecast period.

Based on component, the aircraft MRO market is segmented into engine MRO, avionics MRO, airframe MRO, cabin MRO, landing gear MRO, and others. The engine MRO segment held the largest share in 2020. The same segment is expected to consistently hold the significant share during the forecast period owing to the increasing demand for engines services. 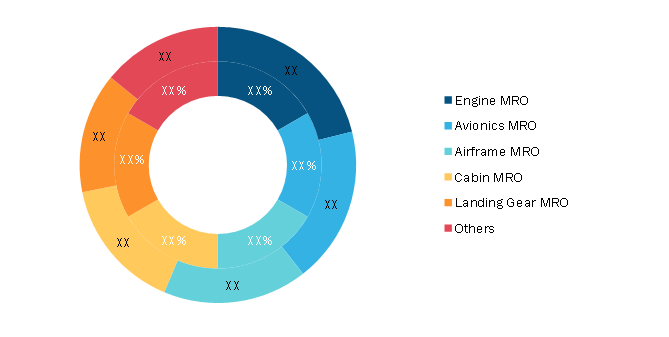 Based on end-user, the aircraft MRO market is bifurcated into commercial and military. In 2020, the commercial segment held a larger market share and is expected to hold the significant share during 2021–2028.

The players operating in the aircraft MRO market adopt strategies such as mergers, acquisitions, expansion, and market initiatives to maintain their positions in the market. A few developments by key players are listed below:

In March 2021, Barnes Aerospace announced that it is expanding its maintenance, repair, and overhaul facility in West Chester, Ohio. The West Chester MRO operation specializes in a variety of critical machining functions and extensive inspection applications for the global aviation industry.

In February 2021, GE Aviation and Etihad Airways partnered to launch GE’s 360 Foam Wash, a groundbreaking jet engine cleaning system, to optimize performance of Etihad’s GE90 and GEnx-1B engines on its Boeing 777 and 787 fleets.

What factors are providing opportunities for aircraft MRO market?
The deployment of various retrofitting technologies, which refers to the implementation of newer technologies on older aircraft fleet, help increase passenger comfort and safety, and also facilitates the airlines in maintaining their older fleet. The continuous advancements in the aircraft technologies is resulting in up gradation of MRO capabilities. This is due to the fact that the MRO service providers are constantly seeking up gradation and procurement of newer technologies in order to service the newer aircrafts as well as retrofit the upgraded technologies on the older aircraft fleets. The global commercial airlines in the current scenario are holding on to their older aircraft fleet owing to the drop in fuel prices. This factor is compelling the airlines to opt for MRO activities frequently, which is facilitating the MRO service providers to offer the airlines to retrofit the aircraft fleet with newer technologies.
Which factor is driving the aircraft MRO market?
The immense growth of low-cost carriers has been the main driver of air traffic growth in the Asia region. Thus, potential countries in terms of the aviation industry in Asia region, such as India, China, Singapore, Japan, Thailand, and others, generate more revenue for the aircraft MRO market in the APAC region. China is the second-largest defense spending nation after the US. China invest substantial amounts in its defense forces which enable the air force to procure new aircraft fleets and opt for maintenance, repair and overhaul activities.
Which component led the aircraft MRO market?
Despite low fuel costs in the current aviation industry, aircraft owners (commercial and military) are continuing with their existing fleet; this is, in turn, propelling the demand for engine MRO. As the aviation sector continues to witness an exponential rise in passenger count, the flying hours of each aircraft also increase, leading to the degradation of aircraft engines. In other words, higher the flying hours, greater is the need for maintenance and repair activities of aircraft engines.