The increasing incidence of eye disorders is substantially driving the medical lasers systems market. North America is likely to continue its dominance in the medical lasers systems market during the forecast period. The US holds the largest market share in North America and is expected to continue this trend during the forecast period. According to the statistics released by the Centers for Disease Control and Prevention (CDC), around 610,000 deaths are recorded due to heart diseases in the US, which is 1 in every 4 deaths.

Additionally, the rising interest of people in personal aesthetics and grooming, such as hair laser removal treatment and laser skin treatment, is likely to influence the medical lasers systems market growth during the forecast period. According to the Skin Cancer Foundation report, approx. 10,130 deaths are recorded due to melanoma every year in the US. Also, the American Academy of Dermatology (AAD) report states that 1 in 3 Americans visit dermatologists, and 1 in 4 is affected by skin disease every year. Medical lasers systems help in the rapid diagnosis and treatment of skin disorders. All these factors are supporting the medical lasers systems market. 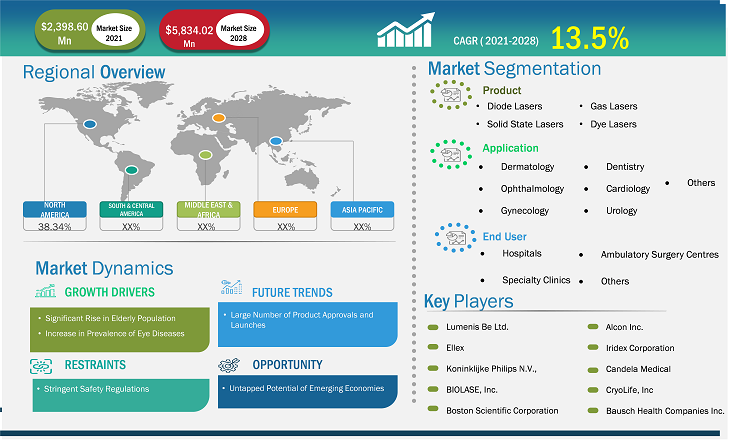 A report by the US Census Bureau states that the number of people in the US aged 65 and above is anticipated to grow from 46 million in 2016 to more than 98 million by 2060. Their population share is anticipated to surge from ~15% to ~24% during this period. Another report, published by the United Nation's World Population Ageing, states that Europe had the world's highest percentage (i.e., 25%) of people aged more than 60 years in 2017. Further, by 2050, all regions, except Africa, would have ~25% or more of their populations aged 60 and above.

Moreover, underdeveloped and developing countries would account for ~80% of this growth. Ophthalmic diseases constitute a significant share of health problems among older people. Age-related macular degeneration resulting in loss of central vision, glaucoma, retinal detachment, cataracts, and diabetic retinopathy are among the most common ophthalmic diseases among the geriatric population. Diabetic retinopathy is also common among older people during the early stages of diabetes or at the time of the diagnosis. A mydriatic examination is recommended when a patient is diagnosed with diabetes and once a year after that. According to the American Institute of Ophthalmology, almost 24.4 million people under the age of 40 undergo cataract surgery, and nearly half of all Americans undergo cataract surgery by the age of 75.

The solid-state lasers segment would account for the largest market share during the forecast period. Solid-state lasers have gained attention in the global market owing to their significant improvement in the performance of such specialized lasers. This is evaluated as output power levels, wall-plug efficiency, reliability, and range of available wavelengths from the pump diodes and diode arrays. Also, modular and multiwavelength solid-state lasers provide therapeutic radiation proving effective for laser-lithotripsy, laser-angioplasty, neurosurgery, general surgery, and dentistry. Furthermore, solid-state lasers have had successful medical applications for many years due to their quick use and low absorption power in the water, which penetrates deeply into the skin and is mostly used in dermatology for hair removal and tissue rejuvenation.

Based on application, the medical lasers systems market is segmented into dermatology, ophthalmology, gynecology, dentistry, cardiology, urology, and others. The dermatology segment holds a considerable market share and is projected to continue its dominance during the forecast period. Advances in medical laser systems have enabled successful surgeries for multiple eye diseases, such as diabetic retinopathy, retinal tears, detachment, and macular degeneration. These medical lasers systems help prevent vision loss by improving sight. Additionally, the manufacturers are bringing innovative products to the market. For example, Nidek, in May 2019, announced the launching of a new product by introducing the “YC-200 S plus ophthalmic YAG and SLT laser system/YC-200 ophthalmic YAG laser system”, ensuring efficacious treatments for the patients.

By end user, the medical lasers systems market is segmented into hospitals, specialty clinics, ambulatory surgery centers, and others. The specialty clinics segment held a considerable share of the market in 2021, and it is likely to continue its dominance during the forecast period. Specialty clinics are centers of excellence assuring to deliver high standards of clinical outcomes. Specialty clinics focus on any one organ, a body system, or a particular disease. Therefore, these clinics are staffed with para-medical and nursing personnel with specialized skills that have been perfected over time. The role of specialty clinics in detecting, diagnosing, and managing eye disease, cardiac diseases, and others have gained huge attention. These factors have raised the demand for medical lasers systems.

Product launches and approvals are among the most commonly adopted strategies by companies to expand their global footprints and product portfolios. Market players also focus on the partnership strategy to enlarge their clientele, which, in turn, permits them to maintain their brand name across the world. They aim to flourish their market shares with the development of innovative products. Lumenis Be Ltd.; Ellex; Koninklijke Philips N.V.; BIOLASE, Inc.; Boston Scientific Corporation; Bausch Health Companies Inc.; Alcon Inc.; Iridex Corporation; Candela Medical; and Artivion, Inc. are the leading companies operating in the medical lasers systems market.