A set-top box (STB) is an information system that typically includes a TV tuner input and shows the output of a TV set and an external signal source. The STB converts the source signal into the material in a format that can then be shown on a TV screen or other display device. They are found in cable television, satellite television, and over-the-air television networks. A device that connects to the TV makes it possible to use a telephone line or cable to access the Internet and exchange electronic mail on the TV.

The key factor driving the set top box market is the rising technological transformations in set-top box (STB). Technological developments have led to the growth of a wide range of STBs equipped with various features. This, in turn, has made the competition fierce between the set-top box companies. Digital video recording is one of the most anticipated functions since it enables viewers to view and archive their favorite shows. An over-the-air DVR system is a standalone set-top box that enables viewers to transmit and record TV programs. In addition to DVRs, subscription-based TV service providers offer STBs to customers. In addition, DISH, a US-based television provider, has incorporated artificial intelligence into boxes in its new set-top boxes to allow recording facilities at STBs. With the support of technology such as natural language processing (NLP), companies implement features such as voice commands to enable channels and TV shows to be searched using technologically advanced set-top boxes.

With favorable government policies to boost innovation and reinforce infrastructure capabilities, North America has the highest acceptance and development rate of emerging technologies. Any impact on industries is therefore projected to have a negative influence on the region's economic development. Due to the COVID-19 outbreak, the US was the world's worst-affected country, which resulted in a sudden standstill across all the industries present in the region.

Millions of Americans sat at home amid the COVID-19 crisis and turned to their TVs as a primary source of news, information, and entertainment. Cable news network viewing rose by 73% versus the same week in 2019. Thus, this has created a huge demand for set-top boxes across the region. However, owing to the nationwide lockdown across major economies such as the US and Canada, the manufacturing of the same was negatively impacted. Moreover, the supply chain of the set-top box market was adversely affected from both local and international players as supply of raw materials and components used for the manufacturing of STB got disrupted. Thus, the COVID-19 pandemic negatively affected the set top box market growth.

The COVID-19 outbreak appears to have accelerated the trend toward over-the-top (OTT) video streaming services and away from the pay-TV industry. In North America, traditional pay-TV systems including cable, satellite, and internet protocol television (IPTV) have been losing subscribers recently. The pay-TV market was more severely impacted by the lockdowns brought on by COVID-19 during the first quarter of 2020, with a loss of more than 2 million customers in North America alone. However, in 2021, the preference of consumers shifted more toward plug-and-play gadgets with OTT capabilities. As a result, the market is steadily rebounding and expanding. 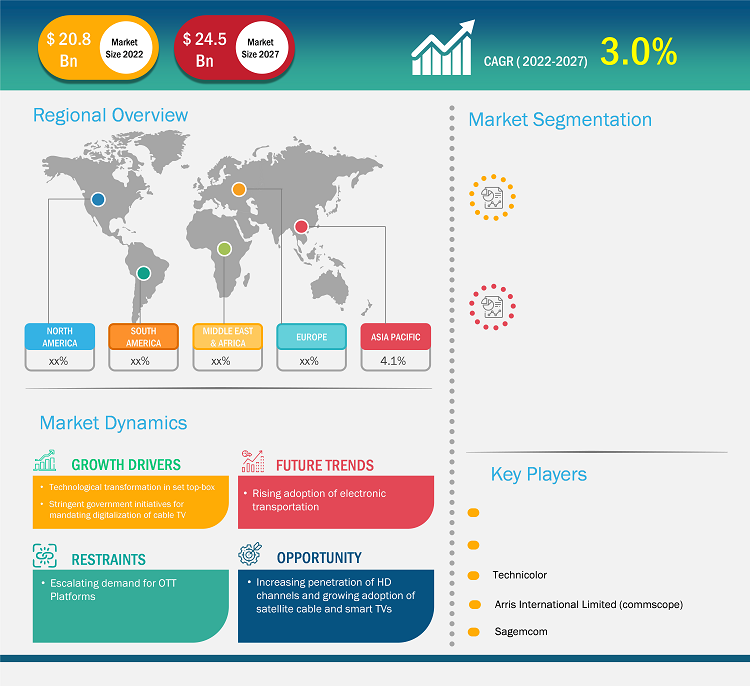 In North America, one of the key market drivers is the rise in digital entertainment penetration among rural and urban populations. Increased consumer awareness of rapid technological advances and the comparison between efficiency, characteristics, pricing, and benefits have been seen in the region, particularly among the urban population. The arrival of major STB vendors in countries such as the US and Canada has positively affected the regional market growth. Moreover, the increasing prominence of global OTT service providers, such as Netflix, Star TV Network, and Amazon Prime Video, is expected to accelerate growth exponentially in developing countries.

Based on product, the set top box market size is categorized into cable, satellite, IPTV, and others. The cable segment held the largest market share in 2021 in the global set top box market share. Since cable TV continues to be the most widely used medium for educating the public and providing information, various cable service providers are enhancing their technological and service portfolios, the penetration of same is still high in the market.

The penetration of IPTV and other types of STB such as AI-based and OTT-based STB is rising. This increase is projected to fuel the demand for advanced STBs. With the increase in mentioned types of STB, the inclination toward cable STB is impacting.

What are the future trends in the set top box market?
Growing demand for integration of OTT platforms with set-top box is expected to create more futuristic demand for advanced set top box. This will further impact the market growth positively.