The adoption of number of surveillance cameras is increasing rapidly in the developed as well as developing economies across the globe owing to the rising need of public safety. With the rise in crime rates, terrorist attacks, antisocial behavior, the government and public safety agencies are significantly investing on new technologies and strategies to ensure public safety and security. It has become essential to improve the system and responses for catastrophic attacks and to identify cost-effective, safe, and feasible solutions. For instance, in July 2019, the Indian government unveiled its plan to install around 3 lakh CCTV cameras around residential and commercial complexes across Delhi for public safety. Further, to improve security for the Chicago public transportation system, the second-largest city in the United States, the government relied on Sentry360 for establishing a unified surveillance system in the city. Further, the increasing infrastructural spending in the emerging economies is expected to create new growth avenues in the surveillance camera market. Several developing economies across the globe are witnessing high growth in their commercial construction and infrastructural sector. This has resulted in construction of more airports, railway stations, educational institutions, hospitals as well as public projects. This in turn has led to increase adoption of security cameras to monitor and record the behavior and activities of people and thereby protect public places and critical infrastructure.

Digital transformation or digitalization of businesses refers to the integration of digital technology in various business processes, organizational activities and business models. Digital transformation has become a must requirement for sustainable growth of any enterprise owing to the demanding nature of customers and rising industry competition. This digitalization revolution around the world presents a massive opportunity for surveillance camera manufacturers to offer technologically advanced camera solutions to across the world. Both public and private enterprises are investing in advanced surveillance solutions for business process optimization, operational efficiency, reduction of cost, and human error avoidance. These are some of the major factors which are driving the integration of IoT, AI, video analytics and other such technologies in the global surveillance camera market. In the past decade, the proliferation of connected devices, digital services, IoT, and artificial intelligence have increased exponentially. Due to the increasing adoption of advanced and connected systems across enterprises, the demand for technology integrated surveillance cameras market is anticipate to increase at an impressive pace over the forecast period. 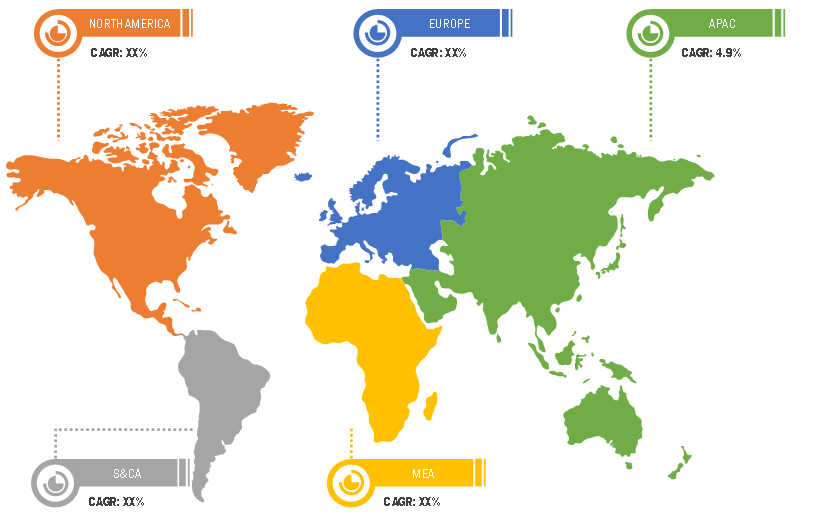 The security and surveillance industry has emerged over the years, and the trend is driving from physical security to video-based security and surveillance with the support of camera technology. The shift is majorly driven by factors such as increased safety and time, cost-efficiency, and convenience of the end-user. Moreover, video surveillance systems offer various benefits to its users, such as better work productivity, remote monitoring, traffic management, protection against theft, and also help in collecting evidence in legal cases. During the initial stage of video surveillance technology, the analog cameras were being utilized significantly; however, the industry is foreseeing a change with the increased acceptance and adoption of IP-based cameras. The major advantage of IP cameras over the conventional cameras is the advantage of transferring captured imageries or data directly over the internet, in a fraction of second. IP cameras are either centralized that need Network Video Recorder (NVR) for monitoring recordings, or decentralized where the camera recordings can be stored in any of the remote or local storing devices. Further, the utilization of Wi-Fi is available with the IP cameras to transfer data instantly. Additionally, the option for installing numerous video analytics software in these cameras for automatic analysis of the imageries by the cameras is also rising the interest among the various end-users.

The surveillance camera market by type is segmented by analog cameras and IP cameras. The Internet Protocol cameras (IP cameras) are the type of digital video cameras which receive control data and send image data through the Internet. These cameras are widely utilized for surveillance, but unlike analog CCTV cameras, they don’t require local recording devices; they only require local area networks. Most of the IP cameras are webcams, but the term IP camera or netcam generally relates only to those that have the capability to get accessed through a network connection directly. Some IP cameras need the support of a central NVR for handling the recording, alarm, and video management, while others are capable of working in a decentralized manner with no NVR required, as the cameras are able to record directly to any remote or local storage media.

The surveillance camera market by product type is segmented by dome cameras, bullet cameras, box style cameras, PTZ cameras, thermal cameras, and others. The dome camera is one most regularly used camera for indoor and outdoor security and surveillance. The most popular dome cameras are Vandal Proof and Night Vision Cameras, which are best suitable to monitor property where the camera must be fixed near arms reach. The shape of the camera creates difficultly for the onlookers to understand which way the camera is facing and its strong piece of design stops criminals to take any actions by making an air of uncertainty. The other benefits of a dome type of camera comprise ease of installation, vandal-resistant features, and IR night vision.

The global surveillance camera market has been segmented on the basis of end-user into BFSI, government & defense, commercial, manufacturing & construction, healthcare, logistics & transportation, residential, and others. The banking, financial buildings and ATMs are one of the most critical industries and required enhanced security systems in order to protect documents, cash and database among others. Attributing to rising criminal cases across the globe, the banks, financial institutes are installing high end surveillance cameras with advanced technology at their buildings and ATMs to secure the environment. In addition, the increasing number of thefts and fraudulent transactions, as well as stringent regulatory environment are expected to bolster the deployment of surveillance systems. For instance, BS/2, a Lithuanian banking and retail technology company and VisionLabs signed a strategic partnership agreement for contactless identification that would support the companies to significantly increase security and would ward off the risks allied with the unlawful or fraudulent activities while operating self-service terminals, thus, making BS/2's ATMeye.iQ full-scale self-service video surveillance system that offers additional safety and security for self-service devices and their users.

The Global Surveillance Camera Market has been Segmented as Follows: