The market growth is attributed to the high prevalence of infectious and chronic diseases.

The automated cell counters market  comprises major competitive players who adopt various strategies, such as product launches, geographic expansion, and technological advancements. A few recent developments in the market are listed below:

The active participation of market players in product innovation and development and an increase in approvals of products are fueling the growth of the automated cell counters market. Further, with the advent of advanced technologies, the market will grow exponentially during the forecast period.

The increasing technological development and growing research industry make the Chinese automated cell counters market more attractive. For instance, in 2018, Sysmex Corporation launched the XS-500ix, which is an automated Hematology Analyzer in the China market. With the rapidly growing population and economy in China, the demand for tests is also increasing. Therefore, the Chinese government has promoted policies for allocating medical resources to increase efficiency. Thus, this would increase the demand for sophisticated and high-quality products in China, which is expected to boost the market growth of automated cell counters.

According to the Longitudinal Ageing Study in India (LASI) released by the Union Ministry of Family and Health Welfare, 2020, two in three senior citizens in India are suffering from chronic disease. Furthermore, ~23% of the elderly population have multi-morbidities conditions. CVD is the leading disease among the population above 45 years. The CVD percentage in the age group 45–49 years is 19%, and 37% in the population above 75 years. It is expected that ~45% of the total burden of disease due to noncommunicable will be due to the growing elderly population by 2030. According to WHO, ~5.8 million people die from noncommunicable diseases every year in India. Thus, growing chronic disease cases among the elderly population are driving the growth of the automated cell counters market in India. The government of India is implementing the National Programme for Prevention and Control of Cancer, Diabetes, Cardiovascular disease, and Stroke (NPCDS) to create awareness of these diseases. This involves screening for hypertension, diabetes, and oral, breast, and cervical cancers for the early detection of noncommunicable diseases.

Thus, the growing elderly population, chronic disease cases, and measures to control the diseases are expected to boost the automated cell counters market during the forecast period. 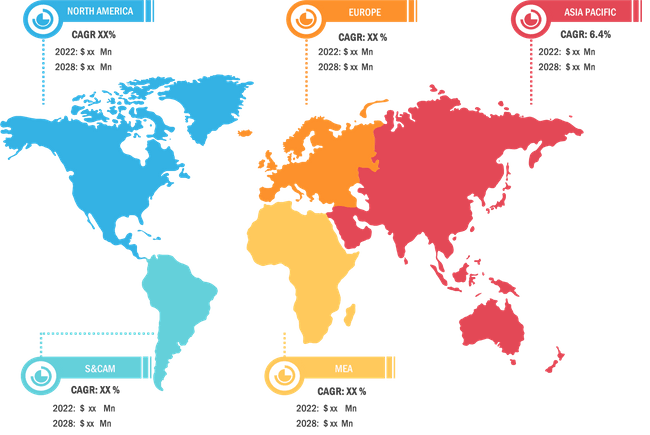 Based on type, the global automated cell counters market is segmented into hemocytometers, flow cytometers, electrical impedance coulter counters, and spectrophotometers. In 2021, the spectrophotometers segment held the largest share of the market. In contrast to spot plates, which must be incubated for several days before colonies appear, spectrophotometer readings can be instantly converted into cell densities. The spectrophotometric method is based on light scattering by the cells in the culture. When the light in a spectrophotometer hits a cell, light rays are deflected from a straight path, and these light rays may not reach the detector. The greater the number of cells in a sample, the lighter scattering occurs. The growing demand for early diagnostic procedures for the detection of diseases is boosting the growth of the spectrometers segment. A surge in drug discovery and drug development activities due to increasing diseases and growth in clinical diagnostic procedures drive the segment’s growth. An increase in government initiatives in drug discovery & development and a rise in applications of spectrophotometers  in bimolecular analysis is driving the growth of the segment.

The hemocytometers segment is expected to register the highest CAGR during the forecast period. A hemocytometer was initially developed for counting blood cells. It has become popular for counting all types of cells, including single-cell organisms such as yeast, protozoa, and bacteria. Hemocytometer is the most cost-effective method for cell counting. Hemocytometer is reusable and can be easily used with other common tools in a laboratory, such as an optical microscope. An increase in the incidence of blood cell disorders that cause anemia, thalassemia, lymphoma, leukemia, and other disorders is driving the segment's growth. For instance, according to WHO, in 2019, global anemia prevalence was 29.9%, equivalent to over half a million women aged 15-49 years. Furthermore, in 2019, global anemia prevalence was 39.8% in children aged 6-59 months, equivalent to 269 million children with anemia. A hemocytometer is used for rapid and effective cell count in developing countries to detect anemia. Thus, the use of hemocytometers for the detection of various blood disorders is expected to propel the growth of this segment from 2022 to 2028.

Companies operating in the automated cell counters market adopt the product innovation strategy to meet the evolving customer demands worldwide, which also permits them to maintain their brand name in the market.