Smart Airport Market Forecast to 2028 - COVID-19 Impact and Global Analysis By Component (Hardware and Software) and Application (Terminal Side, Airside, and Land Side)

The smart airport market growth in Europe is attributed to the strong presence of fully smart airports in European countries. Munich Airport, Frankfurt Airport, London Heathrow Airport, Copenhagen Airport, Zurich International Airport, and Amsterdam Airports in the Netherlands are a few of the major smart airports driving the adoption of IoT & AI-based automated and connected systems across the European smart airport market. Moreover, the airports across European countries are also investing in the implementation of smart technologies across the airports to enhance the passenger experience and increase the airport’s operational efficiency with minimal costs. For instance, in 2021, London Heathrow Airport installed touchless bag drop technology for trial, which was developed by Amadeus—the Spanish IT solution provider. Similarly, Paris Airports (Charles de Gaulle and Orly Airport) had also installed e-gates as part of the French PARAFE program, which involved installing 87 e-gates at Paris airports. Such developments are boosting the growth of the Europe smart airports market.

Companies in the smart airport industry are focusing on providing customer-centric solutions to boost the adoption of smart airport technologies. The demand for baggage tracking from passengers is rising globally, which is one of the main focus areas for airport authorities. According to the Civil Aviation Administration of China (CAAC), in 2021, ~75% of the air passengers in China wanted to know their baggage tracking details and collection time. As per the same research, ~86% of airlines in China focus on providing baggage tracking notifications, and 57% of the airlines also provide baggage collection information to their passengers across China. Thus, vendors in the smart airport market focus on providing smart airline baggage management systems to airlines to automate their business operations and provide a better experience to passengers. Such systems are integrated with cloud-based airline applications and databases, cloud-based analytics, and a machine-to-machine (M2M) and IoT platform to connect, manage, and secure real-time data and events from smart luggage. Moreover, the deployment of baggage management systems in airports also helps reduce overall operational costs and boost overall operational efficiencies.

As air traffic dramatically decreased in response to the COVID-19 pandemic, the estimated financial loss more than tripled in one week. Airports Council International-North America (ACI-NA) published new financial data stating that US airports' losses were at least US$ 13.9 billion in 2020. Losses increased due to the impact of the COVID-19 outbreak on freight and passenger travel. Moreover, the airport closure for regular passengers led the airports to experience deflation in revenue. The adoption rate of technological advancements among US airports is moderate, and owing to the closure of airports, the demand decreased drastically. Airlines have drastically reduced costs and transformed their operations to take advantage of new opportunities to survive the pandemic. As a result of cost-cutting, new technology was purchased and implemented for airport operations that has positively affected the smart airport market size. 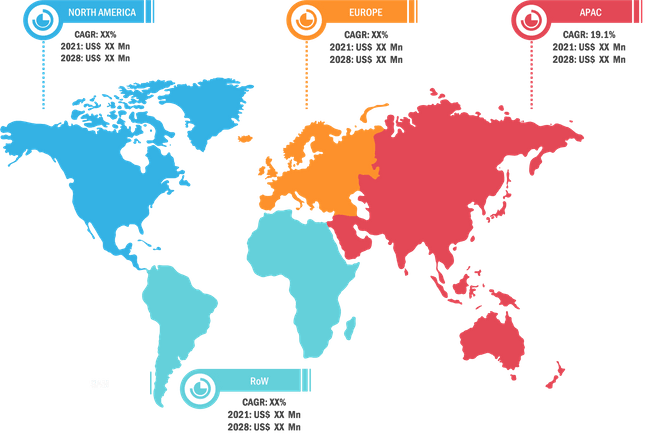 Based on geography, the smart airport market analysis is primarily segmented into North America, Europe, Asia-Pacific (APAC), and the Rest of the World (RoW). In terms of smart airport market share, Asia Pacific is expected to dominate the market in 2022 and it is expected to retain its dominance during the forecast period as well. In Asia Pacific, the demand for smart airport systems is growing owing to many scheduled airport projects across different countries such as China, India, Singapore, Malaysia, and Thailand.

Europe is expected to hold the second-largest share of the smart airport market in 2022 wherein Germany is expected to account for the largest market share in the Europe smart airport market in 2022 Germany has two fully smart airports—Munich and Frankfurt Airports. In 2020, Munich airport became the first European airport to offer a new mobile and cashless payment system in a retail location. The airport plays a key role in promoting easy payments in the airport retail sector with a self-checkout option. This system allows the user to pay for items with their smartphone directly at the shelf using an electronic price tag without waiting in line at the checkout. Instead of paying via an app, the customer pays via a mobile website, meaning that, unlike similar solutions in the European market, users do not need to download an app beforehand. Further, Frankfurt airport is also investing heavily in the technological advancement of smart terminals. The airport authority has already released its plans to deploy smart connections in Terminal 3, allowing the passenger to reach there directly by bus, car, or train. Further, the presence of smart airport system companies such as Siemens and T-Systems International GmbH is another major factor propelling the market growth across the smart airport market in Germany. Such developments across the country are one of the major factors propelling the demand for smart airport systems in the country.

Collins Aerospace, Amadeus IT Group SA, Honeywell International, SITA Aero, and Indra Sistemas S.A. are among the prominent players operating in the smart airport market. The market is highly fragmented, with several players localized in specific regions to cater to domestic demand.

Players operating in the smart airport market are mainly focused on the development of advanced and efficient systems.