In China, LBE points in shopping centers are opening fast. It happens because online shopping is highly cultured, and people do not go to shopping malls just for shopping. Due to this, people are not able to explore the LBE points. As LBEs are mostly found in shopping malls or amusement parks, if people are focusing on online shopping and are not coming out of their houses, this will lead to a downward trend for the location-based entertainment market, as this can be experienced in such LBE places only.

The type of setup used in location-based VR entertainment is for numerous participants, not just one. A virtual reality (VR) experience lets a group of people experience identical sounds, sights, and feelings together. Virtual reality arcade (VRcade) is a VR genre of entertainment characterized by a short time but intensive gameplay. A VRcade experience requires minimum conditions: a playground of several square meters, an HMD (Head-mounted display), and controllers. VR theme parks and attractions use virtual reality technology to provide tourists with a unique and thrilling experience that is different from previous iterations of theme park attractions. In addition to LBE, Arcade is another end user. Arcades studios are the creative studio of designers, who share their feelings through some storytelling through illustration. Arcades are the end user for massive content distribution and attracting a wide audience, providing a 2D and 3D experience. However, arcades must provide a unique experience that cannot be tried at home. The keys to success in this business are quality and unique content, multiplayer interaction, and sensible narrative.

North America is one of the most important regions in terms of the development and acceptance of innovative technologies due to favorable government policies to boost innovation, a massive industrial base, and high purchasing power, especially in developed countries, such as the US and Canada. Hence, any impact on the development of industries is expected to affect the region's economic growth. The US is the world's worst affected country due to the COVID-19 outbreak. The US is a prominent market for location-based entertainment. For instance, Zero Latency, a company that offers immersive LBE experiences in virtual reality (VR), recently announced the expansion of its technology in the US, starting with Las Vegas and moving toward Seattle, Houston, Dallas, Cincinnati, and Orlando. 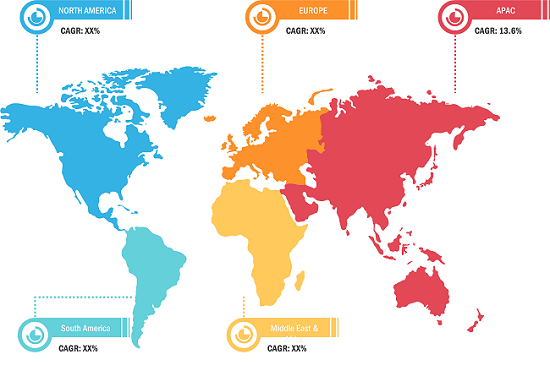 Based on geography, the location-based entertainment market is primarily segmented into North America, Europe, Asia Pacific (APAC), Middle East & Africa (MEA), and South America (SAM). North America held the largest market share in 2021 and would retain its dominance during the forecast period. Whereas APAC is expected to register the highest CAGR in the global location-based entertainment market during the forecast period.

Market players, such as IMAX CORPORATION; VRstudio, Inc.; SpringboardVR, have their footprints in North America. These companies are addressing the consumer requirements of amusement parks, arcade studios, and film studios. For the "Tribeca Drive-In," a Tribeca Film Festival, in March 2020, IMAX Corporation worked with Tribeca Enterprises LLC. This festival featured 30 iconic American films to unite people for storytelling and support the manifestation of their creativity by choosing the immersive experiences offered by IMAX Corporation. Therefore, these corporate strategy plans may help to meet the global market's desire for location-based entertainment. Further, the presence of many amusements park, arcade studios, and film studios in the region, especially in the US, is another dominant factor boosting the demand for location-based entertainment.

Based on technology, the location-based entertainment market is segmented into 2D and 3D. The 3D segment accounted for the largest share of the market in 2021. 3D technology can be more realistic and immersive, allowing improved eye-hand coordination compared to the 2D technology experience that lacks depth perception.

3D environments are produced using computer software and artificial intelligence that replicate the real world or give rise to entirely new environments, which users can deeply explore, just like a game. They can interact with the environment, avatars, and items.