Digital therapeutics provide evidence- based therapeutic intrusions to patients that focusses on the treatment of diseases with the programs, management using the high quality software. Digital therapeutics have made progress in the last few years, harnessing technology for the supplement or potentially replace traditional clinical therapy. They are used independently or in concert with devices, medications, or other therapies for the optimization of patient care and health outcomes. The growth of the digital therapeutics market is attributed to the rising prevalence of chronic diseases, rising pressure on healthcare providers to reduce healthcare costs and rising in the number of partnerships and collaborations in the market. However, cyber threat and rise in data security and researchers can pose major challenges for the growth of global digital therapeutics market.

The digital therapeutics market is expected to witness substantial growth post-pandemic. The global healthcare infrastructure has observed that, in order to develop and maintain sustainable healthcare setup, utilization of digital healthcare in such a scenario becomes crucial so that patient can keep a check on their health at home. Moreover, majority of the market players have focused on development of digital health tools to provide improved self-care and to the patients, remote monitoring of the patients and to fight against coronavirus pandemic. In addition, several number of research centers and governments have actively participated in the building of digital technologies which are assisting the healthcare professionals to work efficiently even under the pandemic scenario. These factors will eventually drive the market growth.

Chronic diseases, including heart disease, stroke, diabetes, and obesity, are the leading causes of death in the world and account for most of the nation’s health care costs. According to report of CDC, in 2018, approximately more than 9% of the population has diabetes, which is the leading cause of kidney failure, lower-limb amputations in US. Moreover, the data also suggests that 1.5 million Americans are diagnosed with diabetes every year in the US. Similar trends for high presence of diabetes are prevalent around other geographies of the globe that include Asia Pacific, Europe, Middle East and Africa. For instance, according to IDF Diabetes Atlas published by the International Diabetes Federation in 2017, south-east Asia is home to approximately one-fifth (19%) of the total diabetes population worldwide.

According to the report of American College of Cardiology Foundation, in 2018, Coronary heart disease (CHD) was the leading cause of deaths attributable to cardiovascular disease (CVD) in the US, which is followed by stroke (16.8%), high BP (9.4%), heart failure (HF) (9.0%), and other CVDs (17.9%). By 2035, approximately 130 million adults in the US population are projected to have some form of CVD. Thus, increasing geriatric population and related chronic diseases are expected to drive the sales of electrosurgical instruments thereby propelling the growth of global electrosurgical devices market over the forecast years.

The obesity rates have been increasing rapidly in developed as well as developing economies across the globe. Factors such as, sedentary life and unhealthy lifestyle are considered to be the major factors for the rise in the number of obese individuals. As per data published by The Organisation for Economic Co-operation, (OECD), in 2015, around 19.5% of the adult population was obese. This rate ranges from less than 6% in Korea and Japan to more than 30% in Hungary, New Zealand, Mexico and the United States. The prevalence has increases rapidly in Australia, Canada, Chile, South Africa and the United Kingdom in the recent decade. Obesity levels are anticipated to be high in the United States, Mexico and England, consisting of around 47%, 39% and 35% of the population respectively by the end of 2030.

Diabetes is a life-threatening disease with no specialized cure. It is mainly caused by the body’s inability to produce or effectively utilize the hormone insulin. This inability prevents the body from adequately regulating blood glucose levels. Diabetes is one of the largest global health emergencies of the 21st century. Each year more and more people live with this condition, which can result in life-changing complications. According to the International Diabetes Federation (IDF), in 2017, number of people with diabetes in North America was approximately 46 million which is expected to grow at 62 million in 2045. Hence, the rise in the prevalence of chronic diseases is anticipated to drive the market during the forecast period.

Based on application, the digital therapeutics market is segmented into respiratory diseases, central nervous system diseases, smoking cessation, musculoskeletal diseases, cardiovascular diseases, diabetes, and other applications. The diabetes segment held the largest market share in 2017.Also, the same segment is estimated to register highest CAGR during the forecast period. 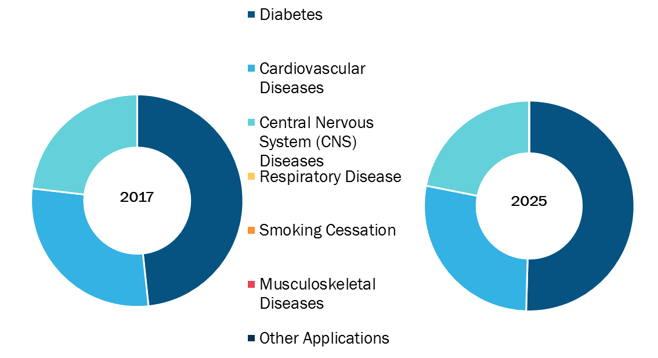 In terms of distribution channel, the global digital therapeutics market is segmented into patients, providers, payers, employers and other distribution channels. The patients segment held the largest share of the market in 2017 and providers segment is estimated to register the highest CAGR during the forecast period.

The digital therapeutics market players are adopting the product launch and expansion strategies to cater to changing customer demands worldwide, which also allows them to maintain their brand name globally.